…rather than Fort William, Antarctica, where, to be honest, no-one would have noticed! However, in a closely-knit community (just look at those jumpers) such as Fort William, bad behaviour by any member of the local chapter of Hells Haggis causes great unrest.

As local West Highland Constabulary crime-fighting duo Doch-an-Dorris exclusively told our reporter: ‘That wee nyaff Hamish wid guddle troot frae his grannie!’ Apparently, they explained, this means that he is a bit of a bampot; which failed to make the point any clearer. He was eventually arrested as he waited to board the Jacobite Steam Train to make an, admittedly fairly sedate, getaway to the far western and truly lawless lands of Mallaig.

Back in Fort William itself, the chaos caused was extensive. He had broken into the trophy room at the An Aird home of Fort William Shinty Club and stolen three cups. For some reason, he didn’t take the matching teapot. He shouted abuse at several of the tourists still shamelessly wandering about the streets as late as 7pm in the evening: ‘Ye can tak oor souvenirs but ye canny tak oor freedom!’

Having then lost his Clan Nad tartan mini-kilt, he continued screaming their battle cry of ‘Go Nads’ as he ran naked up and down the street.

It was at this point he was chased to the station, arrested, and charged with a breach of the peace – although he vehemently denies damaging anybody’s sandwiches.

Our correspondent later interviewed his distraught brother Hugh G Neeps, together with sister Ann Tatties. Both are members of the growing online religious community, the Wi-Free, and were critical of his behaviour. ‘Hamish was a troubled youth,’ they confirmed, ‘refusing to attend church more than five or six times on any Sunday’. 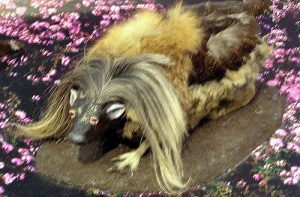 He also then embarked on a volatile relationship with local haggette Aggie Dhu (made famous in a later pop song, thanks to her passing resemblance to a pineapple). Incidentally, their son is Fort William’s rising winter sports star ‘Ski Ian’ who takes his mother’s surname (just work the rest of this joke out for yourselves).

During his trial yesterday, Hamish’s temper was described by the judge, Sheriff Court, as ‘whisky soused’ and ‘piping hot’, but his defence barrister claimed he only ever drank coffee. However, he was found guilty on all charges and was told he was now in really hot water.

Hamish, the wild haggis, has escaped when being moved to prison in Glasgow. When asked why he was being taken there on foot, his escort casually replied ‘Ach it’s just the West Highland Way’. The public are warned to approach him with caution, and never while carrying a knife and fork.

Many people believe that a haggis is not actually a wild animal at all. Please mention this to a live one, and just see their hackles rise. The good news is that those sold in shops have been carefully subdued and should be safe to consume. Please tell us if anybody actually believes this…

Hahaha that's brilliant, made our night! :)

Once described a haggis and its lifestyle to an English woman. She sneeringly told me I was lying cos she knew haggis is a flower!

Sounds like they live in Glenlachart and are friends of Rupert

Glad you enjoyed the article Liz, and thanks for the kind words :)

Hilarious, a good and humorous start to your business, I wish you success.

Thanks Libby, glad you enjoyed it :)