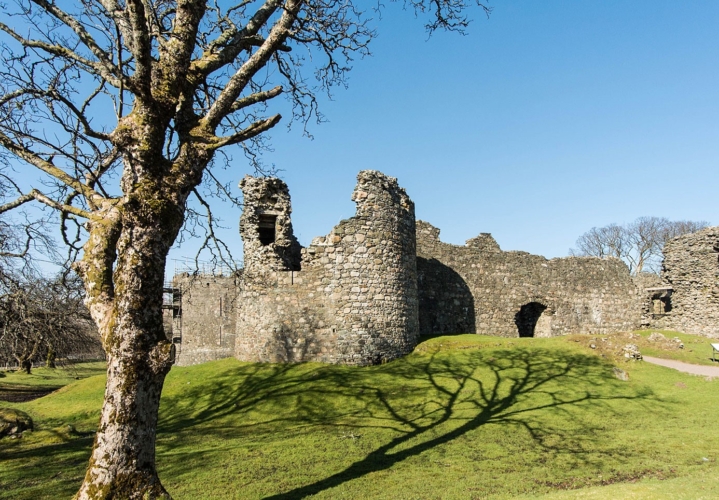 When you head just a mile or so north on the A82 from your Fort William base, you’ll come across one stopping point well worthy of your attention. This is the stunning site of Old Inverlochy Castle. Even before you reach this destination, you’ll pass the village of the same name. Interestingly, the village was purpose-built, almost a century ago, simply to house workers, and their families, from the nearby British Aluminium Company smelter.

Providing a stop along the Great Glen Way

It’s also possible you might stop at Old Inverlochy Castle as you enjoy part or all of this popular long distance path. Starting at the Old Fort in Fort William itself, it takes walkers the 79 miles up to Inverness. Whether as the stopping point or as a visit all on its own, time spent at Old Inverlochy Castle will quickly transport you to days when traditional Highland welcomes could occasionally be much less – well – welcoming!

A nobleman, chief of Clan Comyn, Lord of Badenoch and Lochaber, and known as one of the Guardians of Scotland, John Comyn was one of a group of men who, through the centuries and down the ages, have acted as de facto heads of state, when any future king or queen was still of minority age. He was one of six, who from 1286 to 1292, acted as regents for Margaret, Maid of Norway. She became the Queen of Scots in 1286, but died in Orkney, aged just seven, when travelling to Scotland in 1290. As a descendant of King Donald III, he was one of 13 who were then known as the Competitors for the Crown of Scotland. He, however, didn’t push his own claim, being an ally of another claimant, who also happened to be his brother-in-law. This was John Balliol, who then ascended to the throne on St Andrew’s Day in 1292. John Comyn was tasked with the defence of the north of Scotland from possible Danish or Viking invasions. He is credited with the construction of several castles, and parts of Balvenie Castle, up in Moray, as well as Old Inverlochy, now in the care of the government agency Historic Scotland, still survive. Incidentally, Comyn is believed to equate to the modern surname of Cumming.

A historic castle, an ancient settlement, and a couple of bloody battles

Old Inverlochy Castle remains largely unchanged since it was built, probably between 1270-80, but may not even have been the first settlement on the spot. It has been suggested that a much earlier Pictish fortified settlement, perhaps then destroyed by Viking invaders, once covered the same area, perhaps half a millennium before. This has also been the site of two recorded battles. As the Comyns fell from royal favour, the castle had been unoccupied for a while before the first, which took place close by in 1431. The army of the Earls of Mar and Caithness, supporting King James I, was defeated by a smaller force, led by Alasdair Carrach, belonging to the Lord of the Isles. The castle came under the control of Clan Cameron for the rest of the century. The second battle, in February 1645, was won by the Royalist army of the Marquis of Montrose, who then used the castle as a stopping point, after he triumphed over the Roundhead or Covenanter (a Presbyterian movement, named after the covenant between God and the Israelites from the Old Testament) forces of the Earl of Argyll. The 1,300 Clan Campbell defenders of the castle were cruelly massacred. Throughout its colourful history, like many other castles, Old Inverlochy passed through many ownerships, depending on who was in royal favour at the time. In the mid 17th century, the castle was abandoned in favour of a timber fort built by Oliver Cromwell. Before the end of that century, this had also been replaced by a stone construct named Fort William, now known as “The Old Fort”.

The fact that Old Inverlochy Castle is described as a ruin actually adds to the attraction for visitors. So many other castles and stately homes have changed dramatically throughout the years, much changed from their original design. Inverlochy is still largely untouched, left as it was intended to be, standing proud, almost defiant, in its battles with time. It is squarely set on the south bank of the River Lochy, which flows on down to Fort William itself. Seeming to have set itself as the guardian of the entrance to The Great Glen, the three sides away from the river were also protected by a ditch or moat. One particular point of interest is that Old Inverlochy is a castle of enceinte, meaning that its main defence is a powerful curtain wall, with round towers at each of the four corners. The largest of these is known as The Comyn Tower, and this served as the castle’s keep (its refuge of last resort when under attack). This wall is set around a quadrangular inner courtyard. The main entrance is to the south, with a ‘watergate’ on the river side; both of these were protected by a portcullis. The trail of the Old Military Road, one of many built by General George Wade, just prior to the time of the Jacobite Rebellion, can lead you back down to ever-welcoming Fort William. Around the start of the Victorian era, a chateau-style ‘castle’ was built; this has now been transformed into the nearby luxury hotel (Inverlochy Castle Hotel).

As you investigate Old Inverlochy Castle, know that you are in historically fine company, as Queen Victoria herself made a visit in 1873. You can see it much as she did, and your mind’s eye will no doubt allow you moments considering the valour or fear, distress or pride, of those who, across the centuries, looked to survive within its strong walls and stout heart.