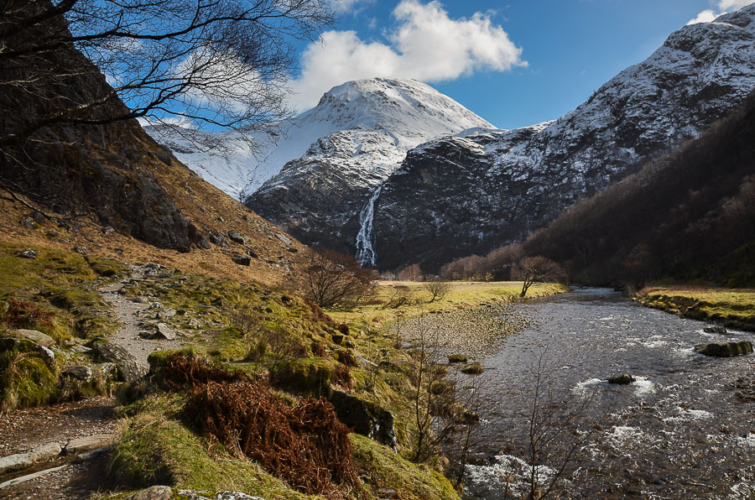 A Fort, a Glen, a Way, and a White Spout

The four areas mentioned in the title come together to offer much to enjoy for the many welcome visitors to this area. The Fort – Fort William itself – provides the end point for the West Highland Way walking trail. The town nestles comfortably at the foot of Glen Nevis and it’s in this great place that you’ll find An Steall Ban – The Steall Falls – whose Gaelic name means ‘The White Spout’.

Where Braveheart or The Highlander could have met Rob Roy

Scenes from these three terrific movies – and many other films and TV series – have been filmed around and about Glen Nevis and the Fort William area. The town itself provides a great entry point into this glorious glen, which is then headed at its north end by the stark and majestic Ben Nevis itself. Another popular destination to the north is another iconic peak, Aonach Mor, where there is so much to enjoy at the Nevis Range Mountain Resort. You can enter by public road, which wanders up the glen for 10 kilometres, although, be warned, it does become a single track 7 kilometres in. From the car park at the end of the road, a path wends its way into the gorge. Another word of warning: this trek is not for everyone. A sign in the car park does remind people that it is a challenge rather than a stroll, while the path is a regular victim of soil erosion from bearing the weight of so many feet. If you do choose to scramble your way onwards, you’ll be rewarded as it carries you into the stunning tranquillity of the upper glen. By the way, at the foot of the glen, you’ll find both a youth hostel and a campsite, where you’ll also likely find new friends from all corners of the earth. In the glen, you’ll also find the tiny hamlet of Achriabhach, and one other unforgettable place…

In the upper glen, you’ll find a wire bridge. Crossing it, you come upon the base of The Steall Falls. This is the second highest waterfall in all of Scotland, its single drop covering an amazing and hectic 120 metres. The water is fed into the Water of Nevis, which then becomes the River Nevis, which later flows under the bridge in Fort William itself, on its way into Loch Linnhe. These awe-inspiring wilderness falls can also be viewed from the path in the Nevis Gorge.

Find the Ring, my precious

There’s an east-west ridge, around 15 kilometres in length, that lies between Glen Nevis and Loch Leven. This is the home to a group of ten Munros. This is the name for mountains over 3,000 feet, named after Sir Hugh Munro, who first listed all such Scottish hills. This particular group is known as the Mamores, and hikers and others can gain access from upper Glen Nevis. A popular shorter walk among many is the Ring of Steall, which forms a circuit of the corrie above the Falls themselves. Completing this takes you across four of the Munros, namely Sgurr a’ Mhàim, Am Bodach, Stob Coire a’ Chàirn and finally An Gearanach. Taking time to learn the names, you can surely tell friends back home of a truly precious ‘ring’ experience!

It occasionally rains in western Scotland. Honestly. Interestingly, many visitors to the Lower Falls in Glen Nevis say that rainfall adds to the spectacle, as an awesome volume of fresh water crashes over the falls and races on towards its eventual seaside destination. However, it’s advisable to keep clear of the banks on such frantic days. You can take a path upstream from the bridge for some quiet reflection, or admire huge boulders resting awhile downstream. In winter, the river and falls can sometimes become frozen, offering a whole new vista to enjoy. This area is also the home of the ‘don’t miss it’ Glen Nevis River Race. This annual event, described by The Guardian as one of ‘Britain’s more eccentric sporting activities’, has been a summer highlight for well over 40 years. The brave, or foolhardy – you decide – navigate a couple of miles of the river, from a starting point beside a lower waterfall, using lilos and other novelty floatation devices. Depending on the mood of the water, it can take anywhere from 20 minutes to two hours to complete the course! The winner apparently becomes that year’s proud owner of the World Extreme Lilo Champion title.

Also mentioned in our title, this long distance footpath covers over 154km, from its starting point at Milngavie, just north of Glasgow, to the finish line in the middle of the High Street in Fort William itself. Officially opened in 1980, it was the first designated long distance footpath in Scotland. It uses ancient drovers’, military, and coaching roads. Most people walk it from south to north; apparently this keeps the endless Scottish sun from your eyes. It’s reckoned that around 30,000 hardy souls complete this full trail each year and another 55,000 use part of it. The Way is home to several ultra marathons, and there is also an annual high summer West Highland Way Race along its full length. For those completing part or all of this trail, whether racing or taking a week or more at their own leisurely pace, Fort William surely offers a friendly place to finally put your feet up for a while!

The Glen Nevis Visitor Centre, less than two miles into the glen itself, offers car parking with a river view and so much valuable visitor information. Of course, visiting or staying for a while in beautiful Fort William provides a perfect setting off point. As so many welcome visitors already know, time spent in Glen Nevis will certainly provide a feast for the eyes, so much to be remembered, and some gentle nurture for the traveller’s soul.