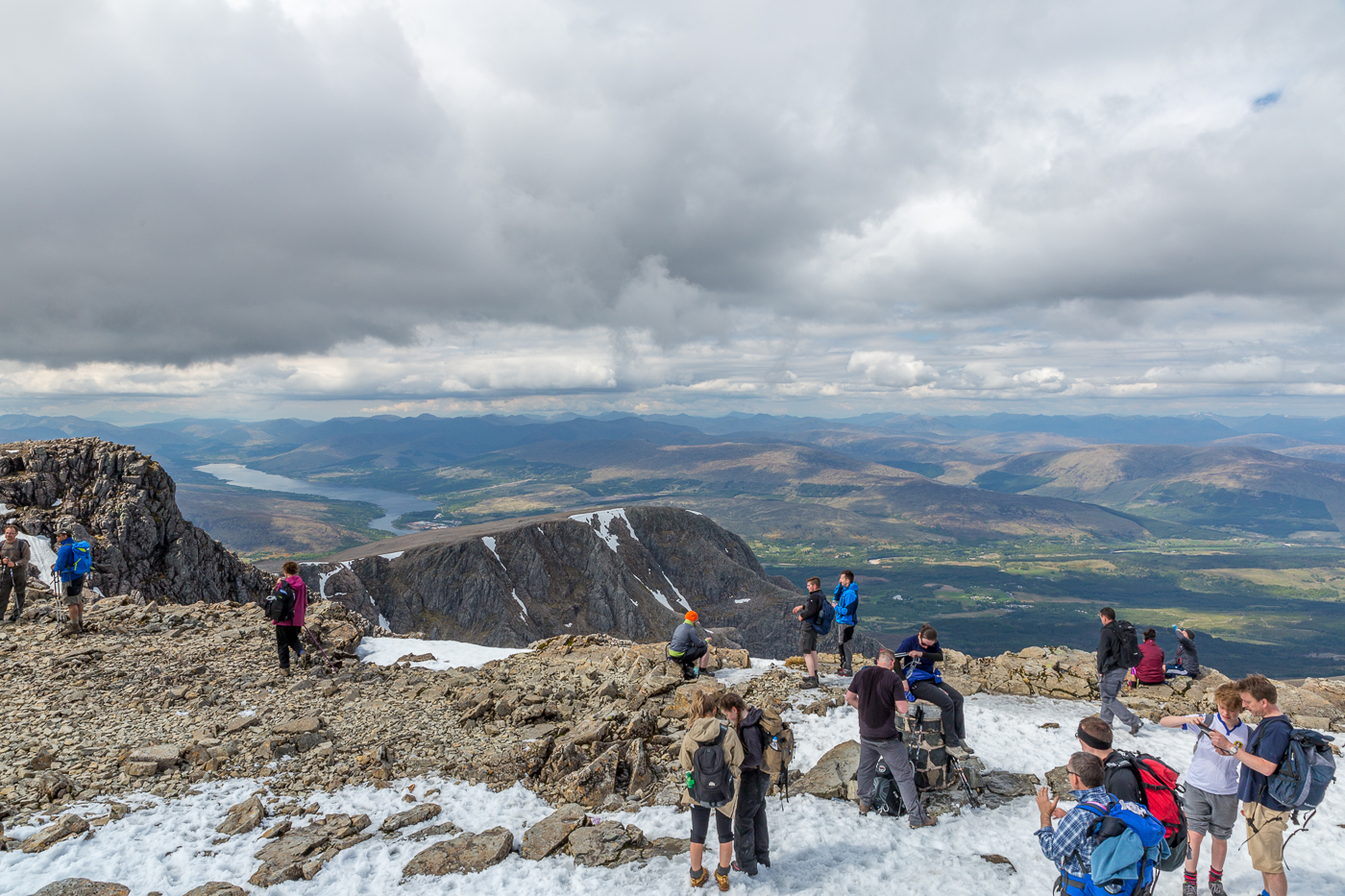 A gentle stroll into the story of Ben Nevis

Starting with John Robertson, a botanist from Edinburgh, who made the first recorded ascent in 1771, it has been estimated that around 100,000 people now climb Ben Nevis each year. The majority tend to use the Pony Track (also called the Ben Path) from Glen Nevis. This substantial number is, however, dwarfed by those who are thrilled by the chance to view this majestic peak, whether from the town of Fort William itself or nearby.

A dramatic climb; an interesting name

With Beinn Nibheis (Gaelic for Ben Nevis) – the British Isles’ highest peak, at 4,411 feet (1344.527m to be exact) above sea level, which is the new height measured by Ordnance Survey in 2016 – the dramatic climb refers to the mountain itself, as much as to those trying one of the ascents. A huge part of the memorable impression it makes is that, unlike so many other peaks, it actually rises over 4,400 feet straight from a sea level starting point by Loch Linnhe. The word ‘Nevis’ itself has been linked to Gaelic words that can mean malicious, poisonous or terrible; yet it has often been said that it casts its eye over the beautiful town of Fort William like a kindly grandfather, which might tie in with yet another translation interpretation which would mean ‘heavens’, ‘clouds’, or ‘the top of a man’s head’!

Taking place on the first Saturday of September, this hugely popular annual timed ascent and descent was first undertaken way back in 1895 by Fort William barber, William Swann. The Ben Nevis Race itself stems from 1951, and nowadays a field of 600 fit and hardy souls take on the challenge of this oldest of races. Amazingly, some folk have completed the course 21 times over the years. For this feat, they receive a cherished Connochie Plaque to recognise their amazing efforts.

A ruined reminder of past days

Another way that Ben Nevis stands apart from most others is the building at its summit, which itself is a large stony plateau, the collapsed dome of a long-extinct volcano. At the peak, you’ll find a cairn with the Ordnance Survey trig point. An observatory was built in 1883 and captured data for the next 21 years. The first path was built at the same time to allow ponies to carry supplies and equipment to the summit. Just over a decade after the building was erected, the West Highland Railway arrived at Fort William. These two events turned the opportunity to scale the land’s highest mountain into a popular goal for so many.

When providence was tempted – and defeated!

Back in May 1911, a local journalist probably thought himself on safe ground to suggest that ‘a tempting of providence’ was taking place. During the previous two years, the launch of the Model T Ford had drawn much criticism from their UK competitors. Percival Perry, UK General Manager, agreed with an amazing idea to counter this negativity and show the vehicle in a positive light. Henry Alexander, the son of Scotland’s first Ford distributor, eagerly agreed to drive a production Model T Ford 4-seat Tourer to the top of Ben Nevis. You could certainly describe him as intrepid – starting out on 9th May, he eventually reached the summit on the 13th, and then took a further five days to return triumphantly to his team’s base in Fort William.

A wild and fiery past

Ben Nevis hasn’t always been the gentle giant that towers over Fort William. It’s actually the remains of a Devonian volcano that came to an end in the Carboniferous period approximately 350 million years ago. There’s evidence close to the summit showing light-coloured granite (which came from subterranean chambers several kilometres below the surface where it had cooled) lying in amongst dark basaltic lavas (these only form at the surface). These 2 lying side-by-side is strong evidence that the massive volcano had collapsed inwards on itself causing a massive explosion similar to that of Thera (2nd millennium BC) or Krakatoa (1883). Ben Nevis is what’s left of the inner dome of the volcano.

If you observe the western and southern flanks of Ben Nevis, you’ll see the longest and steepest hill slope in the whole of the UK, with a rise of about 3,900 feet in just over a mile. The mountain itself forms a massif (main mass) with its neighbour Carn Mor Dearg – another peak rising to over 4,000 feet. To the north, cliffs drop around 2,000 feet to Coire Leis. At this corrie stands the Charles Inglis Clark Memorial Hut, privately owned by the Scottish Mountaineering Club. This is often a base for the many climbing routes that can be taken. Incidentally, many visitors see the pair of tops at Carn Dearg nearby, also standing above the 4,000 feet mark, and mistake the higher for Ben Nevis itself.

A word of warning

Experienced climbers know how much respect Ben Nevis must be accorded. Set in a maritime location, its altitude and topography often lead to poor and dangerous weather conditions for the unprepared. For large parts of the year, hill fog is a regular and clinging visitor, and over 250 gales lash around the peak, as over 171 inches of rain comes down. So, although it’s a wonderful climb to make, you have to be fully prepared, and willing to listen to expert local advice before undertaking any type of ascent. Always imagine that morning sunshine simply means the day hasn’t changed – yet!

There is no better starting place to tackle the mountain – or to simply enjoy the stunning landscape from a distance – than nearby in warm and welcoming Fort William. As you stand there and look towards the peak, it’s also amazing to know that you would find no higher ground until you reach the mountains of Scandinavia. Welcome to the land of Ben Nevis!