‘I’m fair puckled’ is an old Scottish saying for being out-of-breath. If you choose to climb any of the seven great Scottish Highland peaks mentioned here, that will probably happen to you. Of course, some are more challenging than others, and you should always choose those within your compass. Make sure you are well-prepared, with both equipment and instructions, work at your own pace – and then your breath may simply be taken away by the stunning native beauty that these peaks present to you.

Let’s start with the undisputed leader of the pack… 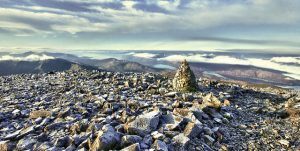 At 1345m, it’s the highest ground for over 400km, until you reach Scandinavia. Set at the western end of the Grampian Mountains, close to Fort William, there are around 100,000 ascents a year. 75% of these use the 1883 Pony Track from Achintee (so close to Fort William, in Glen Nevis. It’s also known as The Tourist Route or Mountain Path. Serious climbers have long been attracted to the 700m north face cliffs, among Scotland’s highest, includes buttresses, towers, ridges (Tower Ridge at 700m the longest) and pinnacles.

There are climbs and scrambles for all experience levels – particularly for ice climbing. The final part is set as zigzags so is not too arduous. Paths are maintained but loose scree, uneven rocks, and running water still make it a challenge, especially on the descent. More experienced hill walkers often start at Torlundy or Nevis Gorge car park.

The summit plateau is kidney shaped, with cliffs on three sides, and is more dangerous in snow. It’s the collapsed dome of an ancient volcano, and the view can extend almost 200 kms across to Country Antrim. There’s an emergency shelter on summit, and the ruins of an observatory staffed until a century ago. Scottish Nobel Prize winner, CTR Wilson, invented the cloud chamber after working there. A piano was even unearthed a decade ago – thought to be the result of a charity stunt 20 years earlier.

After all this exertion, you might enjoy a visit to Ben Nevis Distillery, one of Scotland’s oldest, and see use made of water flowing from the northern corrie of Allt a’ Mhuilinn.

Find out more about Ben Nevis

This rocky ridge, to the north of Glen Coe, offers a couple of Munros. The full ridge is 10km long from the Pap of Glencoe in the west to eastern end at the Devil’s Staircase (a famous path, part of the West Highland Way, named by troops trying to transport materials for constructing the road under the infamous General Wade). It’s reckoned to be just about the most difficult horizontal scrambling ridge in Scotland. The central part is a rocky scramble, steepening grass and scree slopes either side and ending in cliffs!

The usual starting point is Glencoe and it’s traversed east to west. A path from Allt-na-reigh takes you up to Am Bodach and across the ridge to the Munro at Meal Dearg. It’s 2km across several pinnacles, often taking a couple of hours to reach Sgorr nam Fiannaidh. Completing your journey you can descend directly down extremely hazardous zigzag path by Clachaig Gully. Alternatively, and easier, continuing from Sgorr towards Pap of Glencoe, there’s a mountain pass down to the road beside Glencoe village. Others prefer to tackle the pair of Munros separately; many see the traverse as the key to wishing to make this climb. From Devil’s Staircase, looking south, you enjoy wonderful views of Buachaille Etive Mòr, and beyond.

Find out more about Aonach Eagach 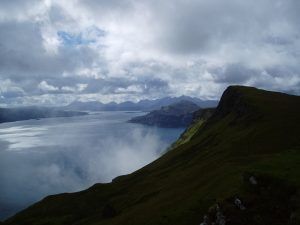 Looking from Portree harbour, your view is dominated by an elevation of 413m, and a prominence around 360m, so it’s definitely a Marilyn! From the summit of this Skye peak, you can enjoy terrific views of The Cuillin, that famous range of mountains immortalised in song. You might spot both golden and sea eagles from the ridge. You ascend from beside the stony beach at Camastianavaig, on the shores of the Sound of Raasay, which is just 5km south east of Portree itself.

You’ll mainly be walking sheep-paths, but the open hill area can be a bit wet. The early part of the path is fenced on both sides, and when this ends, you head right up the hill. This levels off, with a steep drop to be aware of, below a couple of rocky knolls, and then you ascend a third. The sheep tracks continue along the cliff edge to the summit, at just over 400m, and the views seem to grow more stunning with each step. Most folk will simply retrace their journey for the descent – and enjoy the views again!

Find out more about Ben Tianavaig 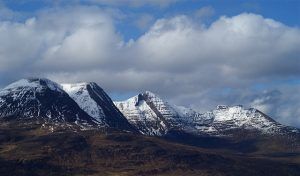 Lying just to the north of Loch Torridon, the name best translates as Jewelled Hill. It offers a pair of Munros – Sgùrr Mhòr to the north and Tom na Gruagaich to the south. A starting point for an ascent is usually between Torridon and Inveralligin and follows the river of Abhainn Coire Mhic Nobuil and then into the corrie at Coir nan Laogh. There are steep grassy slopes to the summit of the second peak mentioned earlier. You would then follow the main Beinn Alligin ridge northwards towards Sgùrr Mhòr.

You’d surely notice the deep gash in the hillside known as the Black Notch (Eag Dubh)! From the summit, you can continue east along the ridge to the rockier Horns of Alligin, recognised as a good scramble in summer, but a serious prospect in other seasons. Another way to descend is to leave the ridge between the two summits where grassy slopes lead west into a nearby glen. Even this is testing in winter.

Find out more about Beinn Alligin

One glance explains the name of this sharp Marilyn, with an elevation of 361m, and situated beside the village of Balmaha, roughly 30km along the West Highland Way. Set on the Highland Boundary Fault, the summit view certainly presents Loch Lomond at its best. Should the skies be clear, you might catch sight of Goat fell on Arran or even Ailsa Craig sitting proudly in the River Clyde. As part of the WHW, it is very accessible, even by ferry if you choose, and offers a handy car park in Balmaha at its base.

If you are taking a dog, be aware that they are completely banned in two enclosed fields to the east side for three weeks or so during the lambing season (late-April and early-May). There’s an excellent path, initially marked with the WHW Thistle symbols. There are steep steps through the trees, and the path then curves between Conic hill and its neighbour. Note the views already! There is a clear if rough grassy path to the ridge line with a short yet steep rocky scramble to the false summit, a short descent, and then up to what is accepted as the true summit.

Alternatively, you can reach the summit via the West Highland Way path; it’s considered easiest to then simply retrace your steps to descend.

Find out more about Conic Hill

Just 7 miles north of Oban, and overlooking the glorious sands of Tralee Beach, this can be a comfortable half-day or evening walk of just 6km, offering summit views out towards Mull. From the village of Benderloch, on the A828, a well-used forest walk, which may be squelchy and boggy towards the end, leads up to that viewpoint on the summit of Beinn Lora. This is not an over-exerting climb, with the mountain top at 308 metres, and you may well encounter a few hill runners.

During your ascent, you will also catch sight of Benderloch Beach, and watch out for the blue route signs (the red ones guide the return trip). You’ll come across a small waterfall, and you might make a short detour by following the sign for Eagle’s Eyrie and more great vistas to enjoy. Often, this is a chosen stop on the return journey. Passing by forest replanting, you’ll notice Oban in the distance and Beinn Lora itself – but there’s a dip to cross. The path will guide you to the summit and an unforgettable view of glorious islands spreading out magnificently before you. Look the other way too! That’s the Ben Cruachan range across Loch Etive.

Find out more about Beinn Lora

One of the Highlands’ iconic views, when standing on the site of the Battle of Glen Shiel, is surely that of The Saddle (An Diollard). With a highest point of 1010m, is recognised by many as a thrilling and challenging mountain. Traversing the supreme Forcan Ridge, in any season, is a classic climb. A common starting point is the car park on the A87 near Shiel Bridge (just before an old quarry). There’s what’s known as a Stalker’s Path westwards and up to a ridge at around 500m. Here, you’re just below the top of Biod an Fhithich. From this point, the climb is steeper towards the foot of Forcan Ridge and then continues west over Sgurr nan Forcan to the main summit. This is a hugely popular ridge walk, without actual rock climbing, but some scrambling.

As you may guess from the name, The Saddle has a pair of summits, and Munro baggers tend to climb both and there is no obvious height advantage, one over the other. An alternative to retracing past steps is to descend by heading south and south-east to Bealach Coire Mhalagain; then to Sgurr na Sgine; or follow a dry-stone dyke line northeast to return to the stalker’s path into Glen Shiel. Another alternative is to continue west over the smaller tops of The Saddle itself and down to the village of Shiel Bridge at the mouth of Loch Duich.

Find out more about The Saddle

Lord Byron, in his poem Lachin y Gair, described Scotland’s peaks as ‘steep frowning glories’ – ‘wild and majestic’ and we applaud his sound judgement. However, he also cautions that ‘Round their white summits though elements war’ – and we do caution care in your exploits as you master any of our selection of peaks, at different levels of difficulty. Fully prepare, time it well, make sure folk know where you are, and when you should return. And then enjoy the effort – and the stunning rewards…