One question most often asked by our junior members, both past and present, and also by some visitors is how we acquire our exhibits.

Some of our exhibits are gifted by individual donors, or by families clearing out attics or outhouses. Or, by serendipity – like the secret portrait our jewel in the crown – found by accident. We are also fortunate because we have received several collections. These are the world famous Carmichael Collection, gifted by Alexander Carmichael’s grandson Michael Carmichael, the Goldman Collection of Scottish Coins and the Hepburn Bequest. The Carmichael Collection has recently been comprehensively written up. The Goldman Collection is self explanatory. The Hepburn Bequest may need a little explanation.

Dr. Charles A. Hepburn, in partnership with Herbert Ross, founded the whisky blending business of Hepburn and Ross. The success of this business allowed Dr. Hepburn to indulge his passion for collecting and become a patron of the arts. After his death in 1971 his collection was distributed to various institutions according to his final wishes. 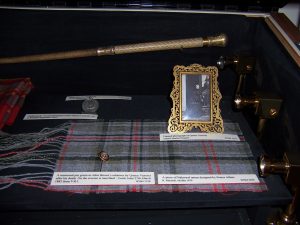 These artefacts included a selection of Jacobite memorabilia ranging from candlesticks belonging to James VII and II to various beautiful miniatures of the exiled Stuart family. The Jacobite collection also includes Prince Charles Edward Stuart’s bonnet from Moy Hall. More bizarrely there is a fragment of a dress worn by Flora MacDonald and the spectacles and case belonging to Lord Lovat of the ’45. According to the picture of the good gentleman he was a large, not very handsome gentleman, so the spectacles must have perched very precariously on his bulbous nose. 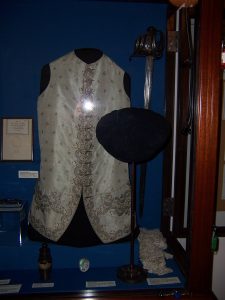 A blue bonnet belonging to Prince Charles Edward and supposedly left by him at Moy Hall is part of the Hepburn Collection.

In the aftermath of the Jacobite risings there is a sheriff’s arrest warrant for Alan Breck. Obviously this was never served and the murder of Colin Campbell in Appin remains a mystery. Moving on we have the Breadalbane Gold Dirk complete with knife and fork, made for the visit to Edinburgh by George IV, when Sir Walter Scott hoped to popularise all things Scottish. The pity was that King George decided to wear pink tights with his kilt. This was not a sight of beauty but the Breadalbane Dirk certainly is. 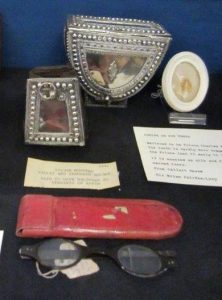 Lord Lovat’s spectacles and case are included in the Collection.

From one monarch to another we come to Queen Victoria. The Hepburn bequest contains John Brown’s highland outfit consisting basket hilt sword, dirk, two belts, sporran, plaid brooch, powder flask and skian dhu. These are engraved “from VR to JB”. This was indeed a real royal gift. There is another Victorian artefact which provides the Museum’s unsolved mystery. Years ago Queen Victoria’s riding whip disappeared, only to reappear some weeks later posted through the front door letter box. Where had it been and why? Nobody knows.

John Brown’s highland outfit is included in the Hepburn bequest.

If you have not previously viewed the Hepburn Collection do come and see. If you do know the collection why not come and refresh your memories.