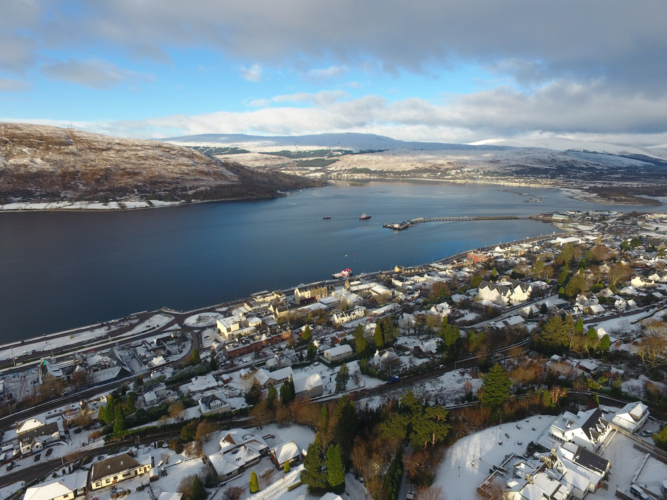 If you were to hover above Fort William, you’d quickly appreciate the validity of both these claims. Close by, you’d notice both Loch Linnhe and Loch Eil, plus the rivers Nevis and Lochy. To the south, you would enjoy the glories of Glencoe, turn north for the awesome splendour of both the Great Glen and Aonach Mor; eyes west and Glenfinnan would quickly come into view. You might also have your attention caught by Ben Nevis itself! In just a few moments, you would fully appreciate why so many folk choose this splendid and friendly Highland town as their base for an unforgettable holiday, and why so many folk then choose to return so often!

A proud and defiant past

If any locals were to welcome you to An Gearasdan (Scottish Gaelic name for Fort William), they would be offering the town’s Gaelic name, derived from the French term Garrison. The town itself became prominent when the fort was constructed at the behest of Oliver Cromwell to control the local population during the English Civil War. It was also used to suppress the later Jacobite uprisings. Indeed, in 1746, the town underwent a two-week siege by their forces. While both Forts Augustus and George in the Great Glen were breached, Fort William stood defiant. To find out more, a visit to the town centre West Highland Museum will be more than worth the time spent.

The ‘Outdoor Capital of the UK’

Fort William is recognised as such for a variety of reasons. Visitors marvel at the scenic spectaculars that reveal themselves in so many locations near to the town. There are stunning forest tracks to trail in the Lochaber area, mountains such as Aonach Mor and Ben Nevis to conquer, lochs to paddle and places to fish. So many spots just around the next corner simply offer the chance for restful contemplation or a memorable picnic. At the other end of the scale, this is the acknowledged home of mountain biking, with World Cup races, and motorcycle trials, with the annual Scottish Six Days Trial event.

Why you might wish for your very own Tardis!

There is so much to do and see, in and around Fort William, that you might well wish for a time-travelling craft to allow you to extend your stay. Time flies, but as Highlanders always say: ‘haste ye back’, so some things might have to wait for your return visit. Let’s take a quick hike through some of the many local area attractions…

Ben Nevis and a twice-filled Hampden

Around 100,000 people ascend this peak each year – the equivalent of two full houses at our national stadium. Beinn Nibheis, to give it its Gaelic name, is the highest mountain in the whole of the British Isles, and the easiest and most-used way to the top is by the Pony Track, starting in nearby Glen Nevis. The cliffs of the north face are the place for the more ardent of climbers, with many scrambles and rock climbs – and ice climbs when the seasons cool. The summit is a collapsed volcano dome and is also the home to the ruins of an observatory from a century and more ago.

Located on Aonach Mor, just seven miles from Fort William itself, this superb facility has been said to make a wilderness more accessible. Opened in 1989, it offers you the chance to ascend by the Gondola, in its enclosed cabins, taking you from 300 to 2,150 feet. Wheelchairs can be accommodated, dogs are welcome, and paragliders and hang gliders also make good use of this amazing facility – as do winter sports lovers. A range of great activities are available, from a Scenic Chair ride over a hidden valley to the ZoomTrax tubing slide on inflatable rings. There are also a series of High Wire Adventure courses for all abilities, as well as forest trails to explore. Terrific refreshments are provided by the Snowgoose Restaurant on high and the Pinemarten Cafe at the foot of the mountain.

The marvel that is The Caledonian Canal

Originally aimed at providing safe shipping access from the Atlantic to the North Sea, this combination of natural lochs and man-made canals covers 60 of the most scenic and memorable miles you will ever find. Travelling its length, you can count 29 locks, 10 bridges and four aqueducts, as well as Lochs Dochfour, Ness, Oich and Lochy. You’ll certainly want to see the eight locks that comprise Neptune’s Staircase at Banavie. This is the longest staircase lock system in Britain, rising by 64 feet. If your wish is to be on the water, you might choose to make relaxed progress on a hotel boat or barge, or hire a cruiser or yacht – and day trips are also available. There is a three to five day Great Glen Canoe Trail for enthusiastic paddlers, and many fishing possibilities in both the lochs and canals, as well as nearby rivers. On foot, the Great Glen Way from Fort William and South Ness Trail from Fort Augustus are popular choices. By bike, and these can be hired, The Caledonia Way (National Cycle Route 78) uses towpaths, forest trails and minor roads to take you from Fort William to Inverness. The Caledonian Canal Visitor Centre at Fort Augustus is well worth a visit.

A Jacobite Steam Train and the Glenfinnan Viaduct

If you are of a certain age, climbing aboard a steam train takes you back to your childhood in just an instant. For younger folk, it is simply the most fun you can have on tracks! This train takes a stunning 41-mile journey along Loch Eil and via Arisaig, from Fort William to the fishing and ferry port of Mallaig. As you cross the unforgettable sweep of the glorious Glenfinnan Viaduct, you’ll suddenly wonder… The answer is ‘yes’ – it did take the Hogwarts Express onwards towards the school and all those adventures! Do check which of the locomotives is on duty when you make the journey. Stopping for a while in Mallaig, your complete round trip will span around six truly memorable hours. Incidentally, in Glenfinnan, you can also view the Glenfinnan Monument, a tower constructed in 1815 to commemorate the raising of the standard by The Young Pretender, Bonnie Prince Charlie, well over fifty years earlier. A Highlander stares out, eternally vigilant, and it’s a mecca for many Jacobite enthusiasts from around the world.

You might not be taking part in the annual river race where competitors use lilos and the like to cover two miles of interesting water. During your visit though, you might find your way to the Steall Falls, placed in the top three highest Scottish waterfalls. From the car park at the end of the public road, a rocky path takes you through a gorge and into a peacefully magic upper glen. A wire bridge takes you across to the tail of the waterfall. A word to the wise: this is a challenging trek, as a sign in the car park will warn you.

Sited on the southern shore of the River Lochy, at the entrance to the Great Glen, the castle was built around 1275 by clan chief John Comyn, Lord of Badenoch and Lochaber. A couple of memorable battles were fought here. In 1431 the force belonging to the Lord of the Isles defeated the larger army of King James I. In 1645, those representing the Royalists were victorious over the Marquess of Argyll’s Covenanter forces. Ruined, like many other castles, Inverlochy is unusual because it is unaltered from its original enceinte construction; that is a castle with a curtain wall around it.

The Grim Grandeur of Glencoe

Regularly described as one of Scotland’s most beautiful places, Gleann Comhann, surrounded by mountain wildernesses, is narrow and said to offer a ‘grim grandeur’. This is a treasured destination for many walkers and hikers, and many winter climbers, and one that is handily sited beside the A82. Rock climbers often head for Buachaille Etive Mor, while skiers make good use of the Glencoe or White Corries Ski Centre with its seven lifts and fine choice of runs. A trio of official campsites are sited around the glen, and wild camping is allowed in certain other areas. Incidentally, The Study, at the Pass of Glencoe, was used as a key location in the film Rob Roy.

And finally, it’s time to see the big picture

As you enjoy so much of what’s to see and do in the Fort William area, you might get the occasion feeling of déjŕ vu. Many classic films and TV series have used these locations. Apart from the already-mentioned Harry Potter and Rob Roy, the waterfalls at the Pass of Glencoe appeared in Monty Python and the Holy Grail. Scenes from Highlander (Connor MacLeod was born in Glenfinnan), Braveheart, Skyfall and others were also shot in this area. Of course, these aren’t really the ‘big’ picture – this will surely be the memories you choose to hold from your time spent in the beautiful and welcoming town of Fort William and its terrific hinterland.

Visit Fort William you will not be disappointed the scenery and culture will leave you wanting more, travel on the Jacobite Steam train, Climb our Wee Hill “Ben Nevis” if you dare, feast on our Scottish fayre and the take a wee dram of Whisky…but don’t tell anyone else it is our secret ok!